Shop LED Forward Bulbs to upgrade the lighting on your car, truck, or motorcycle at Dynamic Appearance. LED bulbs have grown in popularity over recent years thanks to their many benefits over HID. LED technology lasts much longer than other lighting upgrades plus there are no warm-up periods, you get full intensity as soon as you turn on your lights plus installation can't be any simpler since you're just installing 2 bulbs instead of multiple components. We've tested hundreds of automotive LED bulbs to bring you the select few that are the best and brightest for your vehicle. We highly recommend the Morimoto 2Stroke 3.0, GTR Lighting Ultra 2, GTR Lighting CSP Mini, Headlight Revolution S-V.4, Diode Dynamics SL1, Diode Dynamics SLF, VLEDS Micro Evolution, VLEDS Micro Extreme, and XenonDepot XTR LED Pro. Once you select the lights that are right for you, sit back and enjoy our fast free shipping. If you have any questions about LED Forward Bulbs, click on the Live Chat icon in the bottom right corner.

LED lights are legal in the USA for Fog Light use only. Not compliant with DOT / FMVSS108 and not street legal in the USA for Headlights. Legal for off-road use in ATV, snowmobile, and off-road racing use. This usage regulation is not unique to our products. All LED lights from all brands, regardless of marketing claims, are prohibited from street use in halogen headlights in the USA.

Why Choose Us - Dynamic Appearance is not one of the oldest companies in Automotive Lighting, but we strive to be one of the best. Our philosophy is simple...provide our customers with the leading Automotive Lighting brands that excel in performance and longevity, make their shopping experience truly pleasant both before and after the purchase, and to provide the best price possible on everything we carry. Learn how we provide a stress-free shopping experience.

Highest Quality Products - We partner with only the best brands in Automotive Lighting to make sure the product you are purchasing is going to exceed your expectations. To do this, we first test all products that we carry to ensure they meet our standards. We rate each product on their real-world performance, on their external and internal build quality, and the products expected lifespan. All of the brands we carry have met all these requirements including Diode Dynamics, Hylux, LEDGlow, Morimoto, Osram, Philips, Profile Performance, Stattus, VLEDS, and XenonDepot. Even though we have a great lineup of products, we are always testing new products to provide our customers with cutting-edge Automotive Lighting.

One Stop Shop - We carry a wide selection of products to light up every section of your vehicle. We carry HID & LED Conversion Kits for your headlights and fog lights to make your driving experience brighter and safer. We carry LED Headlights, Tail Lights, Fog Lights, and Side Markers to provide you amazing light output while enhancing the look of your vehicle. We carry LED Accent Lighting for the exterior and interior of your vehicle including replacement bulbs to brighten your existing lights, add-on strips to add light in areas that need it, off-road lighting for your Jeep, SUV, or Truck, and lighting to make your Motorcycle stand out. If retrofitting is more your thing then check out our LED DRL Boards that replace your boring stock boards, LED Halo Rings that give your headlights a clean BMW appearance, and HID & LED Projectors to properly focus your headlights to maximize your light output. No matter what you need, we have something for you.

Hassle-Free Shopping - What truly sets us apart is how easy it is to shop with us. Who wants shipping charges added when checking out? Not us, so all of the products ship FREE storewide. What if you made a mistake on the product you ordered? No problem, we have a 30 Day Exchange and Refund policy. Got a defective product? We can get this processed for you and shipped out within 24 hours in some cases...some products don't even need to be shipped back to us. Can't figure out the installation? We have a combined 15 years experience installing Automotive Lighting with over 20,000 jobs to date. Even if it is something we can't directly answer, we will get you the answer quickly. When you choose us, we will do everything within our power to exceed your expectations.

Excellent Customer Service - We are committed to providing amazing customer service to all of our customers. This is why we are proud to have over 800 5-Star Reviews from our local customers on Facebook, Google, and Yelp. When you select us for Automotive Lighting and Window Tint, we will do everything within our power to exceed your expectations.

LED Forward Bulbs Are the Most Popular Vehicle Upgrade

Longing for a new look for your car, truck or SUV? LED forward bulbs are the number-one lighting upgrade, and we've got them at Dynamic Appearance! Want the best LED headlight bulbs? Look at the GTR Ultra 2, setting the new standard with its NLW753 chips and perfect alignment with the original projector. Or maybe you like the CSP Minis, powered by Philips ZES LED chips. Both are a fast plug-and-play away from lighting up your night. And don't forget about the XKGLOW so you can make a bold color statement. But whichever LED forward lighting you choose, you'll love our service and our products every time. We want you satisfied before, during and long after you make your purchase.

Can LED Headlights Be Adjusted?

Yes. Instead of adjusting the headlamp by the assembly's factory screws, rotate the LED headlight bulb's socket to move it.

For more information, check out our tips for adjusting headlights like a pro.

Can I Put LED Bulbs In My Stock Headlights?

Yes. Usually, you'd need a conversion kit, but plug-and-play LED forward bulbs are easy to use. Replace the halogen bulb with the new LED, and plug the power wire into your car's stock wire harness. Do the same for both lights. With so many to choose from, Dynamic Appearance has you covered with the best LED headlight bulbs around!

Light intensity is measured in Kelvin units. The higher the Kelvin scale rating, the more color in the light. This comes at a cost: less visibility. The higher the Kelvin rating, the worse your visibility. 6000K headlights emit a bright white light with a hint of blue, while 8000K LED headlight bulbs are less bright but throw a blue light on the road that some drivers prefer. Scientists say that 6000K LEDs are closer to "pure white light," meaning they emit almost the full spectrum of visible light. In short, go for the 6000K! If you have more questions or need technical support, please contact us or call us at 1-833-443-6533.

Perhaps the best thing to happen to LED replacement headlight bulbs is that this new breed is easy to install and adjust with less under the hood. Faster illumination, longer lifespans, cooler than ever and in-line with the original optics means a bright and crisp beam pattern. And for fun, add a splash of color with the XKGlow 2. LED forward bulbs are available now at Dynamic Appearance! 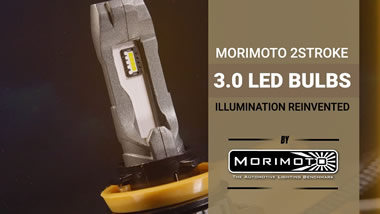 What is the Difference Between HID and LED Headlights?

Why You Should Avoid a Multi-Sided LED Bulb

This LED fog light is the best I have ever seen in the market, thank you Morimoto for the amazing brightness and easy plug and play installation.

Got items fast and everything works great! Will buy again!

This thing is awesome is all I have to say. Didn't expect much but it blew my expectations away!

Been doing business with these guys for a long time, and am never disappointed. Would recommend to anyone.